The lace from Bobowa - a beautiful example of Małopolska folklore 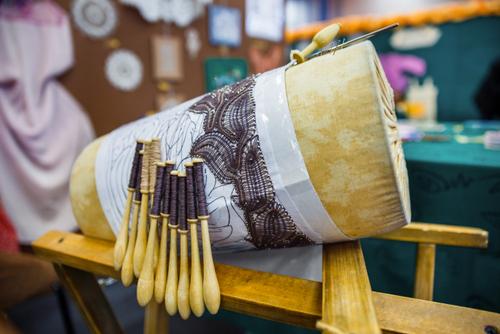 These are handmade, Polish varieties of linen bobbin lace. What distinguishes Bobowa lace from other laces is the traditional way of tying flax threads - wound on wooden blocks that are finished with bobbins and spun. The individual threads are then hooked successively on pins attached to a cushion on which the pattern is placed. The threads are interlaced at different densities, depending on the chosen pattern and type of lace. Bobbin lace is also characterised by the exceptional delicacy of the pattern and the extremely precise weave. For making Bobowa lace, linen threads are used because of their strength and stiffness. The lace can be easily presented, resulting in openwork compositions that delight with their finesse and various forms, shapes, and sizes. Interestingly, the tradition of making this kind of lace came to Poland from Italy and Belgium.

The history of lace

Women have been making lace in Bobowa since time immemorial. According to sources, the history of lace-making in Bobowa had its beginnings in the 16th century. Queen Bona, who was involved in lace sewing herself and brought the art of lace making from Italy, contributed to the spread of the art of lace making in Poland. However, the lace-making tradition has developed most intensively since the 19th century, passed on from generation to generation. In 1899, the National Lace School was established in Bobowa. This local work was appreciated outside Poland, as the school's students won a bronze medal at the exhibition in Saint Louis in 1902, and in 1905, a gold medal in San Francisco. This was a breakthrough moment; since then, cooperatives and associations supporting the art of lace-making and protecting the local heritage started to be set up in Bobowa. In 1949, the Cooperative of Labour RLiA "Koronka-Bobowa" was established. Moreover, the Association of Regional Creativity was established in 1995 to protect the lacemakers' heritage in the Bobowa commune and beyond. Since 2000, cyclical festivals devoted to the art of lace-making and promoting bobbin lace, including the International Bobbin Lace Festival, have been held.

The oldest forms of Bobowa lace that have survived to this day are symmetrical, with circular (rosette) and tape formats. The lace patterns were inspired by regional symbols, shapes and elements present in everyday life. The ornaments are appropriately geometrised and characterised by symbols deeply rooted in tradition. For example, three stitches refer to the Holy Trinity, while five stitches are to remind us of the five wounds of Christ. The most standard lace products are mainly different types of serviettes, tablecloths and other table coverings, in various shapes and forms of the weave. Traditional round, smaller and larger, and square napkins are predominant here. Lace often forms a decorative element within clothing, especially festive clothing. Other decorative elements include lace angels - Christmas tree ornaments that are also becoming increasingly popular.

Bobowa lace artwork is presented in the permanent exhibition in the hall of the Centre for Culture and Promotion of Bobowa Commune the history and cross-section. The Gallery exhibits both the oldest patterns and realisations of Bobowa lace and contemporary examples of lace craft and souvenirs from exhibitions abroad. Interestingly, only 17 places in Europe today make bobbin lace, and Bobowa, the pearl of the Gorlice district, is one of them. Thereby it is worthwhile to visit this place and become acquainted with the rich cultural heritage of the region.