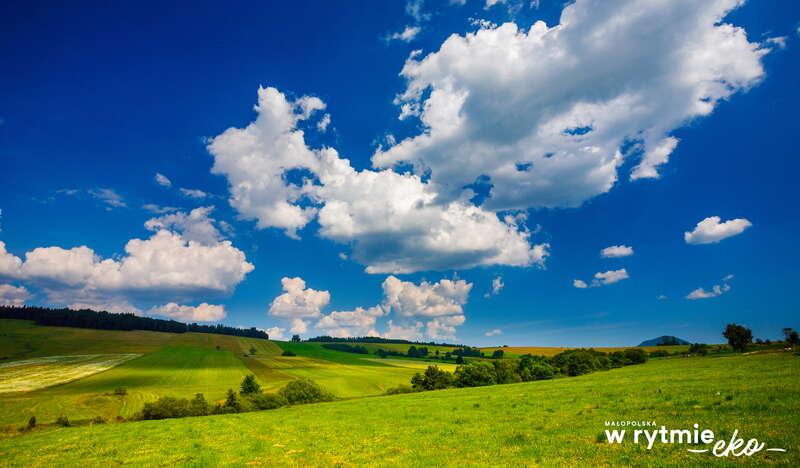 As we approach Nowy Sącz, green hills, outlined with a pattern of fields, orchards and meadows, spread around us. In the distance extend the forested mountain ranges of the Beskid Sądecki. Here, among spruce, sycamore and fir trees, mineral water springs gush. Mountains, forests, rivers, honey, fruit straight from orchards, clean, healthy water, silence, relaxation, peaceful and simple life... can you imagine a more beautiful scenery for an eco-vacation in the bosom of nature? This is a real ‘land of serenity’.

It is a good idea to start an eco-tour around the Sądecki Land in the Low Beskids. For many ecotourists, precisely this part of Małopolska is an ideal destination for eco-recreation. It is a real sanctuary of wild nature where forest backwoods, fir and beech forests, mountain glades, green pastures, meadows full of aromatic herbs and flowers, will surround us with an atmosphere of peace and relaxation. The extremely colourful and diverse cultural landscape of the area has been shaped over the years by the activities of local residents: Wallachians, Lemkos, Poles, Jews, Roma and many other ethnic groups living in these areas. Among the wealth of nature, we can find quiet villages and hamlets, wooden churches, Greek Catholic and Orthodox churches, memorabilia and memories of the displaced Lemko settlements, farms and shepherds’ huts, and cemeteries that tell dramatic stories from the First World War.

This most eastern corner of Małopolska is home to people whose life and creative work tells a new story about the beauty of the place; they will share their passion for it with you. In hospitable agritourism farms you can taste healthy regional cuisine, learn about nature and what a traditional Lemko farm looked like, take part in artistic and culinary workshops. Nothing tastes as good as fresh, home-made bread and mineral water drawn from the springs in Wysowa. The Low Beskids also offer many attractions for water activities fans: Klimkowieckie Lake offers a full range of them. 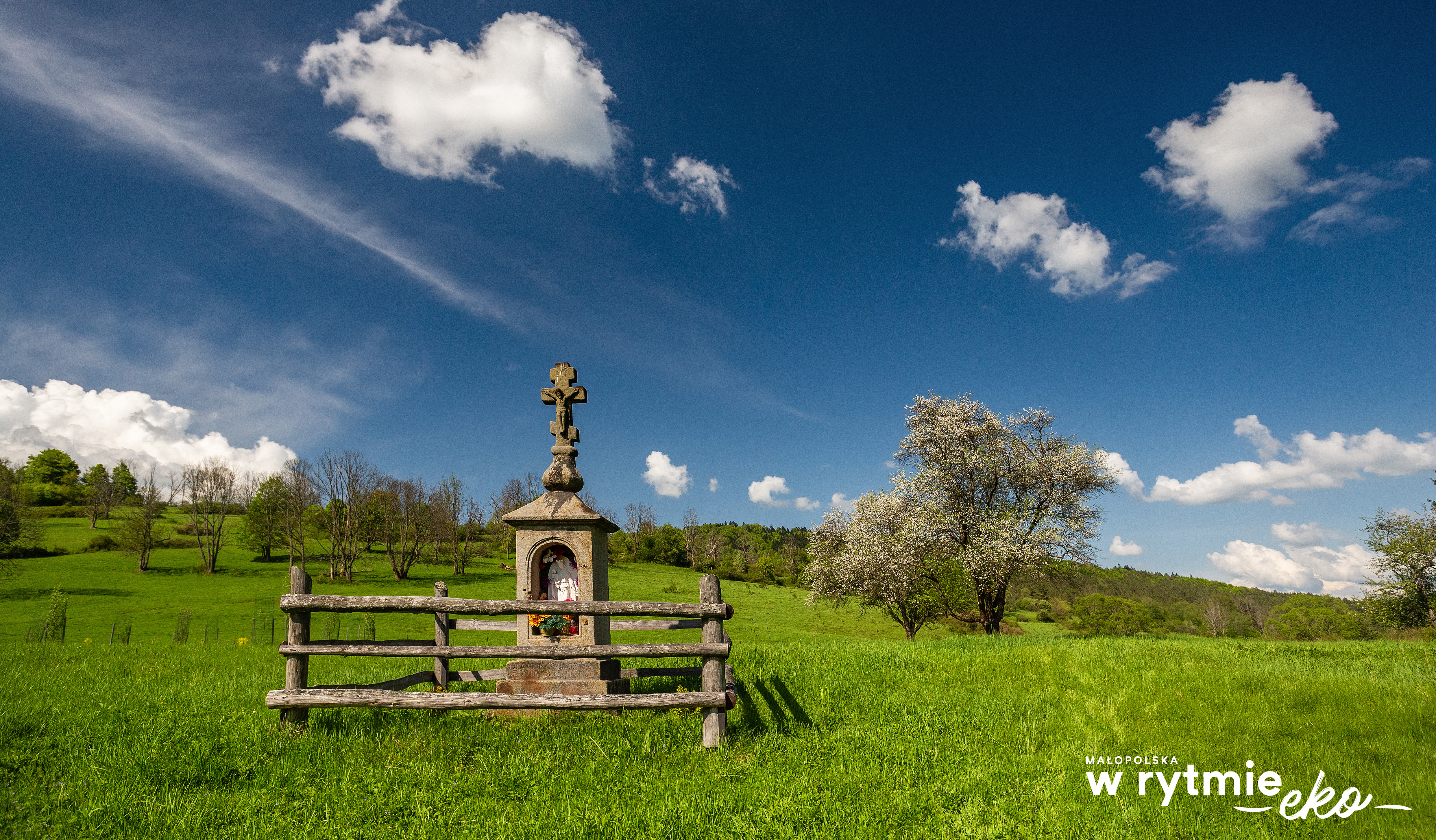 When crossing the Sądecki Region between the Low and Sądecki Beskids, you can easily find places which tell amazing stories of people and their old professions: tar makers from Łosie, lace makers from Bobowa, beekeepers from Stróża. In Szymbark, Gorlice and Łosie, it is worthwhile to visit open-air museums that will allow you to travel in time, become familiar with the history, tradition, culture of the region and learn more about its industrial heritage, as it is in these areas that the first kerosene lamps shone. On the route, you must not miss Biecz, a medieval town called ‘little Krakow’ with a charming market square and a characteristic town hall.

Spas are also an unusual tourist attraction. They include such towns as Krynica-Zdrój, Muszyna, and Piwniczna; they have a lot to offer not only to patients of numerous sanatoriums and skiers skiing down the slopes in winter, but also to ecotourists seeking beautiful views, contact with nature and culture. It is here that the springs of mineral and healing waters soothe the thirst of every hiker returning from the trails of Beskid Sądecki: Jaworzyna Krynicka or Radziejowa.

If someone has followed bicycle reports from Małopolska more carefully, they know that, in recent years, the Poprad Valley has become sprinkled with investments in the form of new bike routes and trails. So... let’s get on a bike and go up and down the VeloKrynica, VeloNatura, AquaVelo routes or the Mineral Water Cycling Trail. Rytro, situated at the foot of a characteristic, very steep hill with the ruins of a medieval castle, also attracts visitors with its unique landscape.

Nowy Sącz itself, the capital of the region, is a charming and dynamically developing city with a large market square, an eclectic town hall and a preserved medieval urban layout. 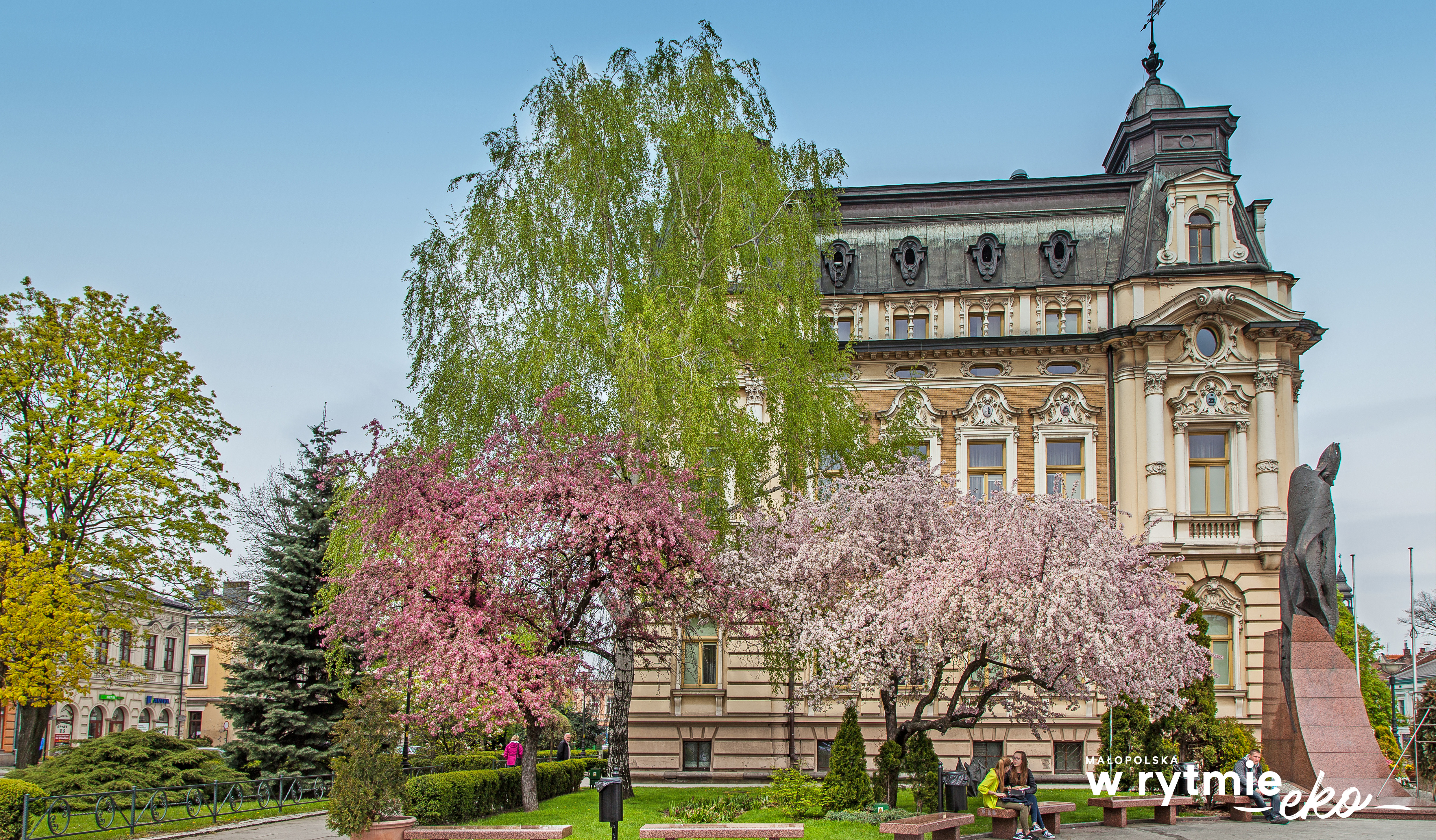 Ecotourists will be particularly interested in the Sądecki Ethnographic Park, surrounded by greenery and featuring traditional wooden architecture and folk culture of all ethnographic and ethnic groups that composed the heritage of the Sącz region. In the Galician Town, which is part of the open-air museum, small-town buildings from the late 19th century were reconstructed, including a small market square and frontages with a dozen houses. We will also see here a town hall, a noble manor, burgher houses, workshops and shops. The reconstructed buildings include: an antiquities shop, a Galician post office, a Jewish inn, a fire station, a pharmacy and a dentist’s office, a Lviv pastry shop, a tailor’s house, a hairdresser’s parlour and shoemaker’s shop, a photographer’s atelier, a watchmaker’s workshop, a pottery workshop and many others. The wonderful atmosphere of this place allows you to travel back in time and feel the mood of the old Galicia. 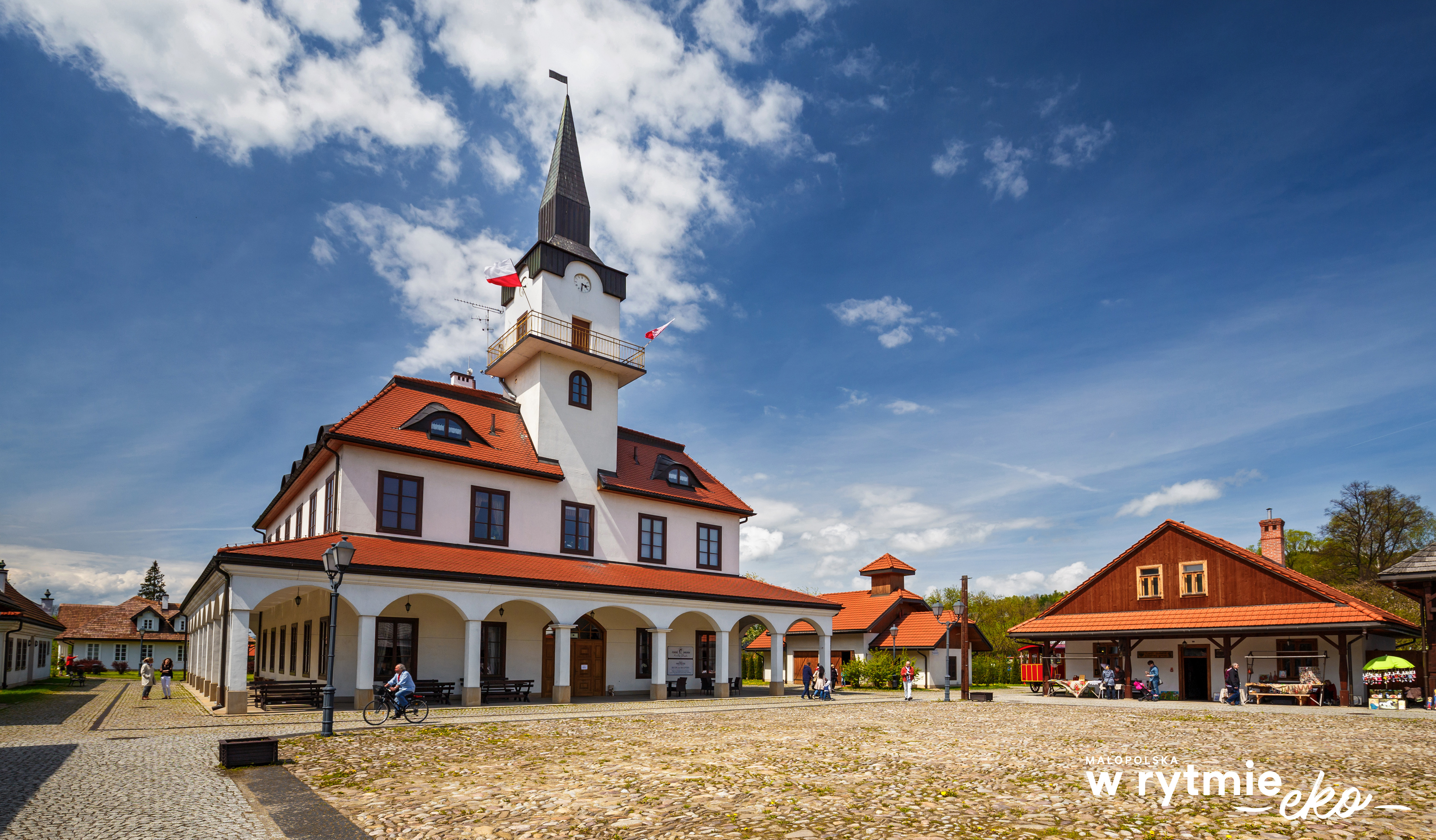 Stary Sącz – one of Poland’s oldest cities – is located nearby, among low, green mountains. This scenic Carpathian town recalls the times of colourful fairs and kings’ visits. Those were also the areas of special fondness for St Kinga who bequeathed numerous ‘gems’ to the region, including the monumental Monastery of the Poor Clares. Stary Sącz has retained a medieval, very simple urban layout based on the Magdeburg Law, where all roads lead to the market square! This large, rectangular square is paved with natural granite pebbles brought from the Tatra Mountains by the Dunajec River. 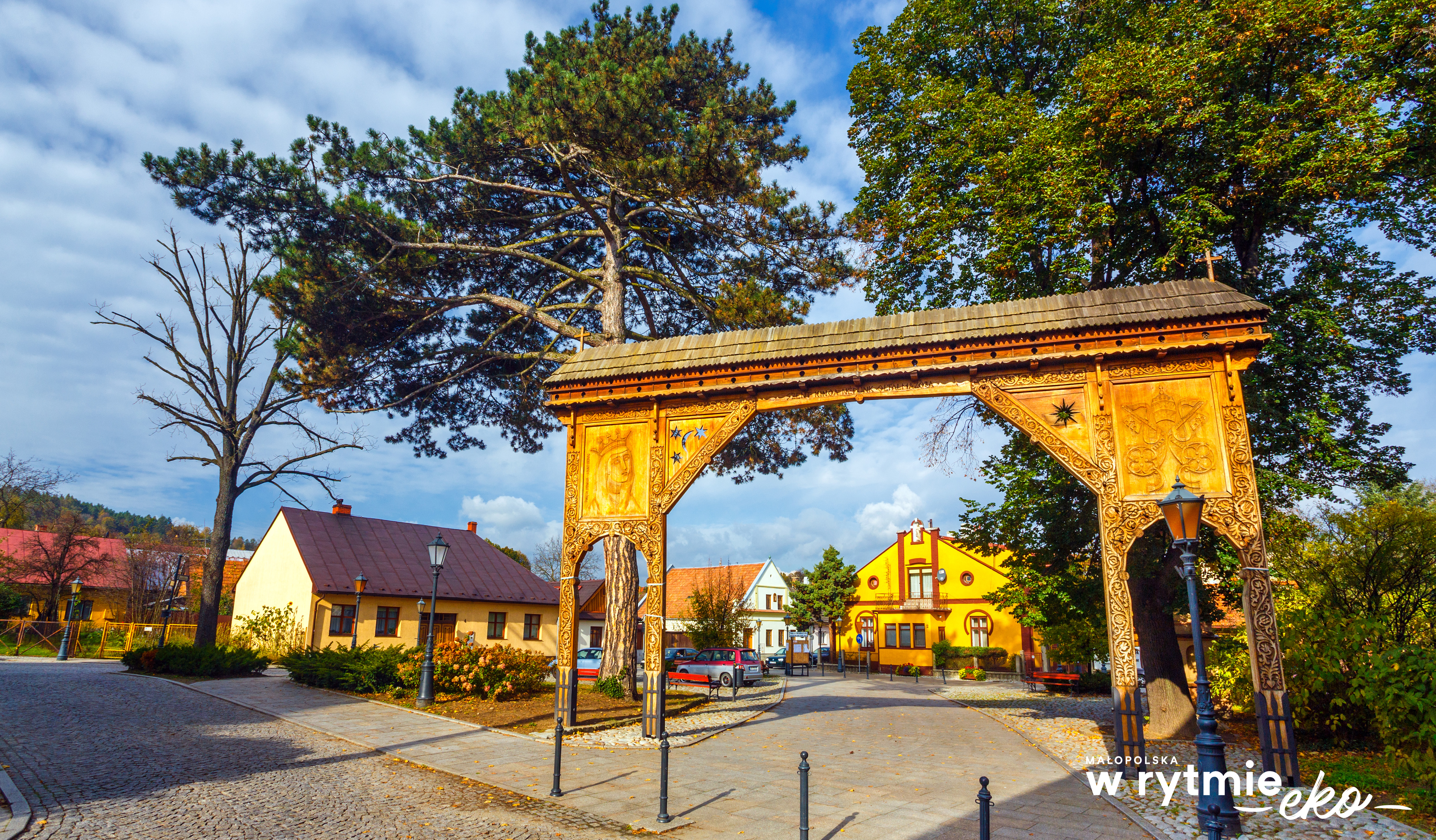 The surroundings amaze visitors with the richness of their nature. It can be observed walking along a nature path among ponds and riparian forests. These wet, dense forests may even remind us of a tropical jungle. Among the reeds, clubs, and horsetails live several unique amphibian species, including the crested newt and the common toad. Many valuable birds, such as grey herons, mute swans, great crested grebes, cormorants and mallard ducks nest here. Wooden bridges connecting two observation points will lead us through the heart of Bobrowisko: originally designed interactive buildings called hideouts, from which you can admire busy beavers, as well as their lodges and dams.

The Sądecki region is also famous for its numerous orchards. Especially in spring, when fruit trees are in full bloom, and in autumn, when ripe fruit turns red on the branches. Fruit, juices and other products from Łącko are famous all over Poland for their aroma and flavour.

Fans of water sports and sailing will also find there a place for their activities. Rożnowskie Lake — a dam reservoir on the Dunajec River is surrounded by steep though not high hills, drawing beautiful panoramas on the horizon.  Numerous bathing areas and rentals of water equipment: sailing boats, pedal boats, kayaks... enable various forms of active summer recreation and refuge from high temperatures.

While wandering through the Sądecki region, do not forget to discover the Zagórzańskie Dziedziny connecting the Beskid Wyspowy and the Gorce Mountains. A region situated far from large urban centres, where time flows more slowly and the colours of nature, the palette of landscapes and climates change like in a fairytale, along with the change of the seasons. Hikers can discover picturesque peaks: Śnieżnica, Lubogoszcz, Szczebel, Jasień, Ćwilin, Kudłoń... all of them offering wonderful panoramas that cannot be found anywhere else! 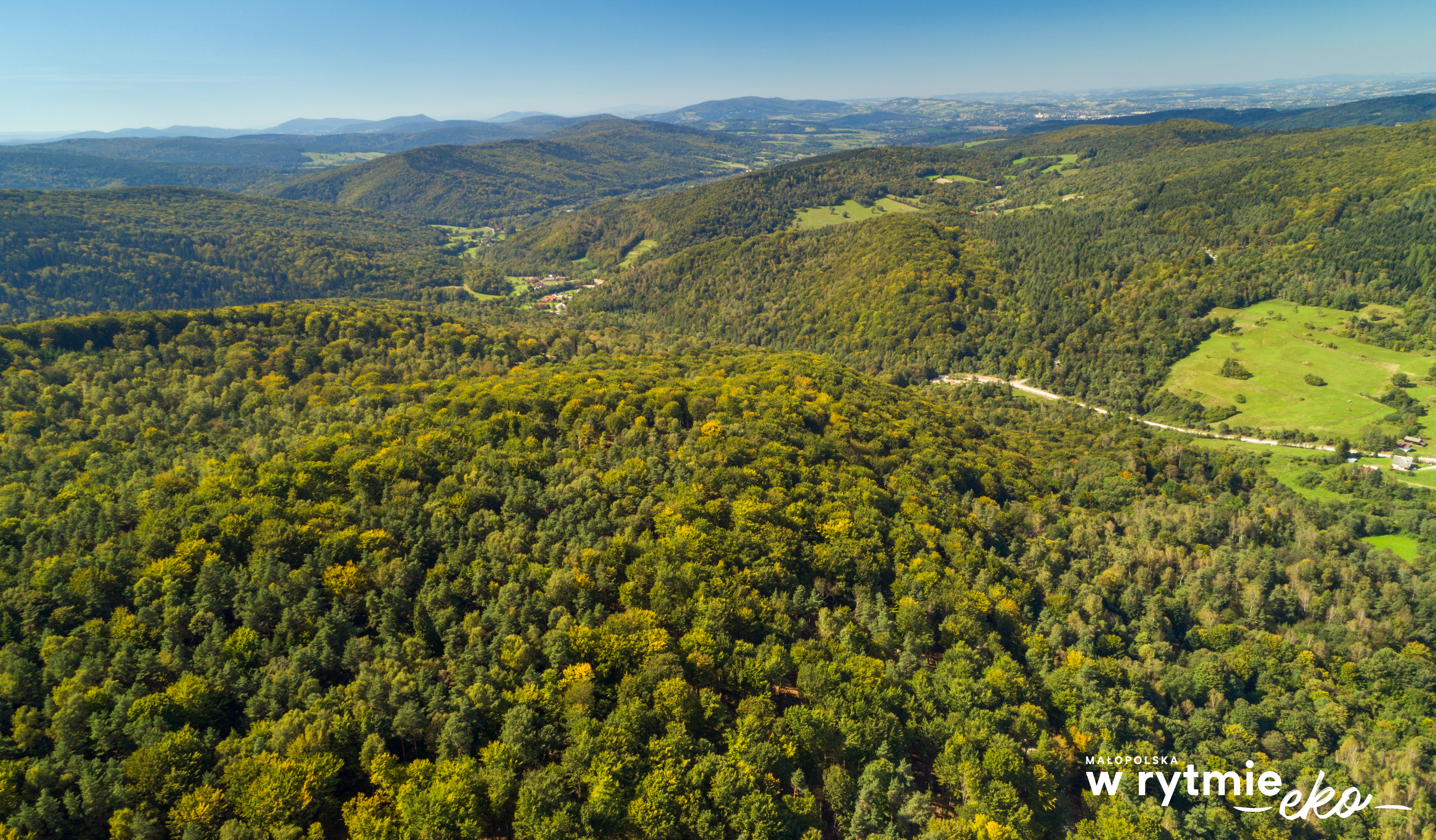 To all those who crave for recreation and the possibility to slow down and find some tranquility, we recommend our eco-excursions available at visitmalopolska.pl/w-rytmie-eko.

See you on the holiday adventure trail!