Olkusz - the perfect place for a weekend - artykul - VisitMalopolska

Olkusz - the perfect place for a weekend

Olkusz is also called the Silver Town and the Polish silver and lead mining cradle. It is an ideal place for a weekend getaway in the vicinity of Kraków. Apart from its exciting and rich history, the location can also offer many valuable natural attractions.

A stroll around the market square among the main town monuments may be diversified with an interesting walk along the Trail of Olkusz Gwareks, a visit to the Museum of Fire Fighting or mysterious underground cellars. In turn, Olkusz surroundings enrapture with beautiful panoramas stretching from the castle hill in Rabsztyn, from the unique Błędowska Desert, or from the heart of the Pazurek Reserve glittering with autumn colours. All this can be admired within 50 kilometres of Kraków! 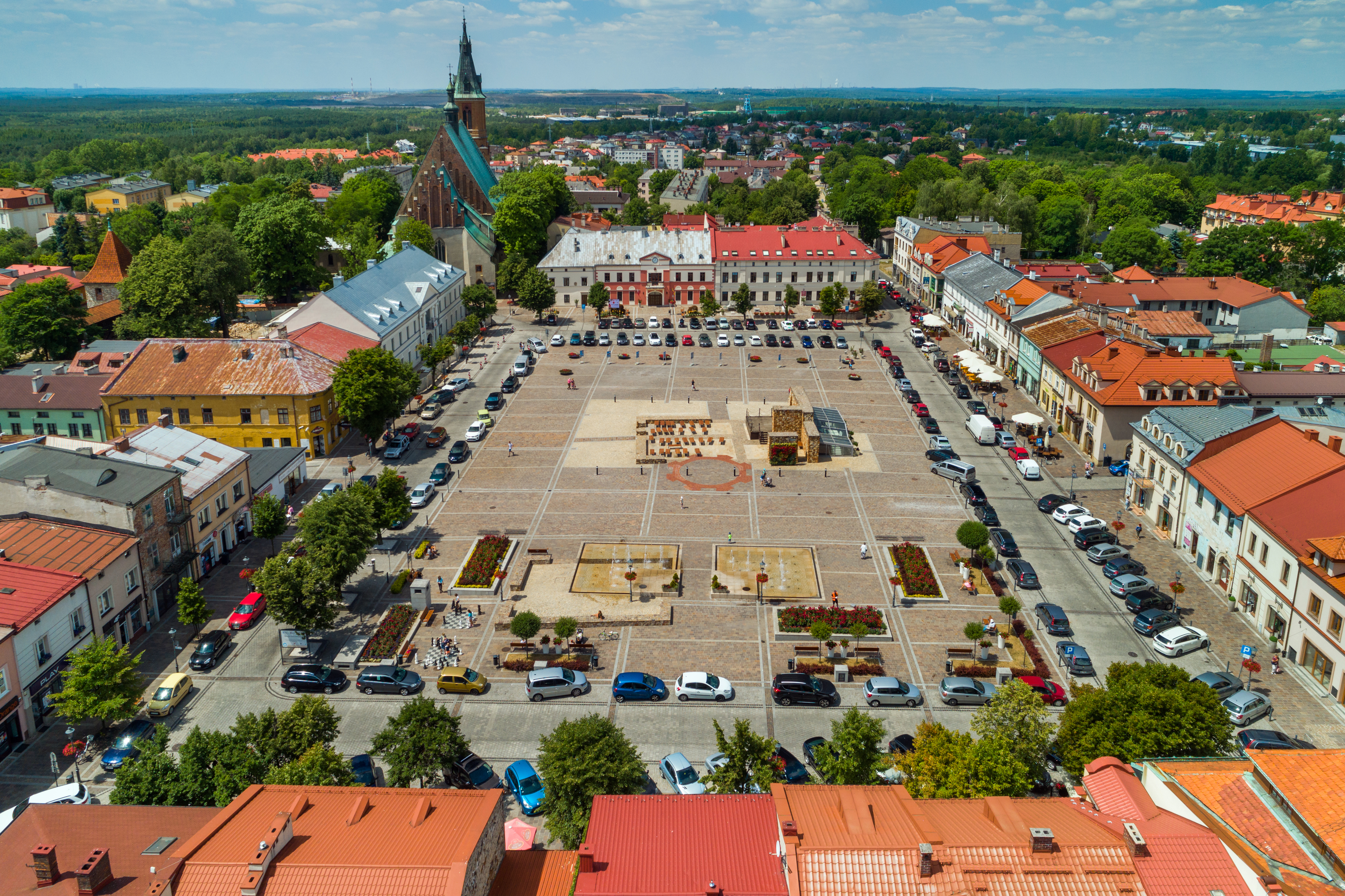 A walk around the Olkusz Market Square

In order to feel the spirit of the town in the best way, one should definitely start sightseeing from the central place - the market square. On the Olkusz Market Square, there are colourful tenement houses, the renovated Town Hall, the starost's office and the church, which should be on the visitors' list. In the cellars of the Town Hall you can see the exciting exhibition “Underground Olkusz”. The charming aura of the Market Square makes a delightful impression and encourages further strolling, especially in sunny autumn weather. The red roof tiles of tenement houses and fragments of brick walls contrast with the blue sky; thus, it is worth stopping and admiring them from the market cafes for a while. The dominant building in the Market Square area is undoubtedly the Basilica of St. Andrew. It is a historic Gothic parish church with rich interior decoration. It is worth walking towards the reconstructed tower with a fragment of a medieval wall. The preserved fragment of the building is an example of the former town fortifications. At present, the tower houses a small exhibition and a café. 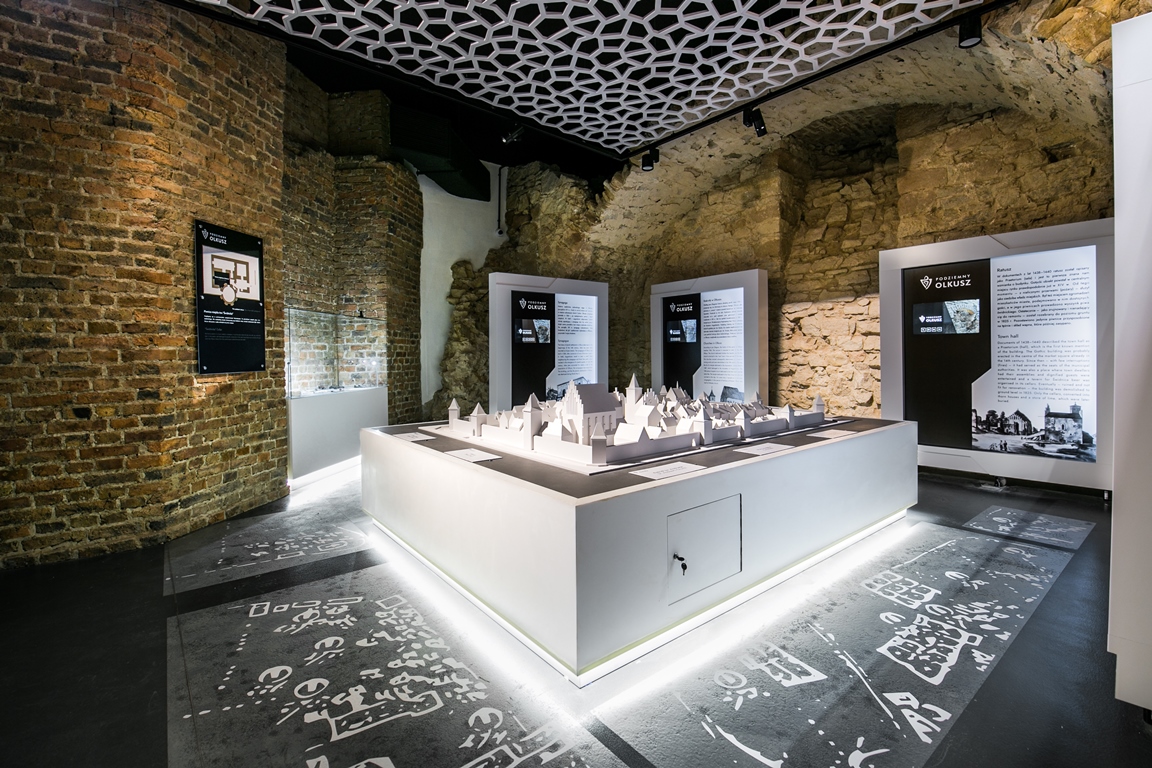 Wandering along the Silver Trail of Olkusz Gwareks

A walk along the Trail of Olkusz Gwareks is an intriguing curiosity and an encouragement to visit Olkusz in an untypical way. Each of the 18 figures located in different parts of the town is connected to a different miner's occupation, each characterised by a different attribute and telling its own story. For example, the gwarek at the Basilica of St. Andrew holds a cross - the Cross of Gwareks, which Olkusz miners founded. In turn, in front of the county building, where the Olkusz mint used to operate, there are gwareks minting coins. These and many other sometimes surprising stories can be learned along the Trail of Gwareks. A walk along the trail is undoubtedly an alternative to sightseeing with the youngest, as it is led along an educational-historical path enriched with an application. It is worth taking up the challenge, answering riddles and trying to find all the figurines of hooded bronze figures. 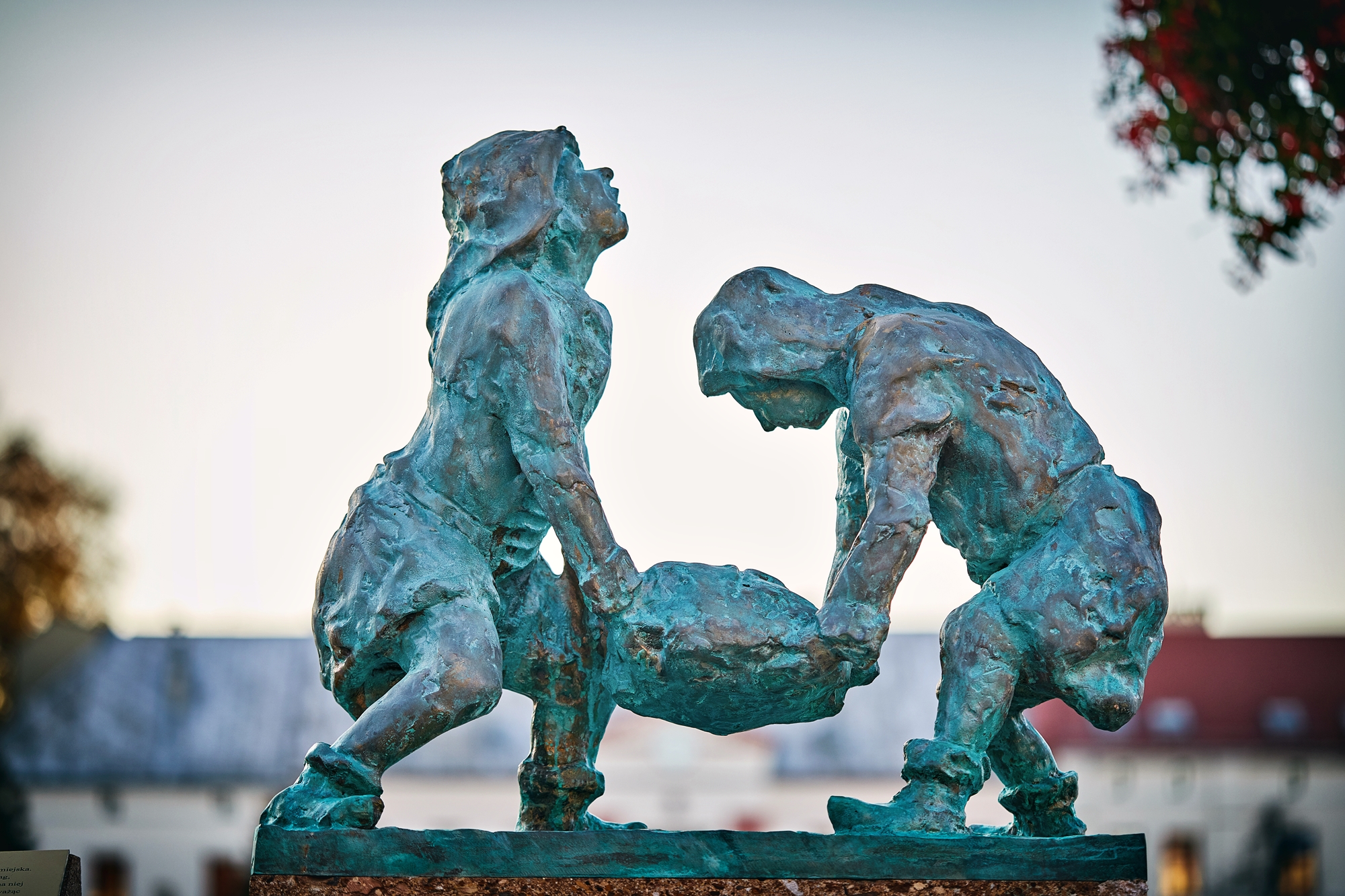 Museums - exotic and local ones

It is an alternative not only for bad weather - those who like visiting museums have a great choice in Olkusz, as the town boasts several museums of various profiles.

The Museum of Fire Fighting is an exciting attraction not only for those fascinated by the firefighting profession. The rich collection of firefighting equipment such as cars, fire engines, helmets and uniforms will surely interest everyone. The alarm bell from 1647 attracts the greatest attention.

The Regional Museum, located in the very centre of Olkusz in the Olkusz Market Square, is one of the oldest regional museums in Poland. The museum presents ethnographic objects related to local legends and beliefs, objects of everyday use, costumes and sculptures. Visitors' attention is drawn to the ore mining exhibition presenting equipment and tools. The collection is supplemented with minerals and Jurassic fossils.

The Museum of Minerals of the Olkusz Land presents the geological wealth of the town and region. It exhibits a collection of minerals from the Olkusz area and fascinating fossils of the Kraków-Częstochowa Jurassic Highland Unique and beautiful specimens of zinc and lead ores are displayed.

Many tourists may be intrigued by an exotic exhibition in the African Museum. It presents a collection of art and paintings of Black Africa named after Professor Dr hab. Anna and pilot Leon Kubarski. The Museum is also one of the largest museums in Poland dedicated to the culture and art of the Black Continent. Visitors can learn about the culture and art of African tribes, especially the Dogon and Tuareg. Instruments, objects of everyday life, famous masks, sculptures, paintings and other works of art are on display.

Interior design enthusiasts and lovers of good design should visit the Wladyslaw Wołkowski Creativity Museum, known as the Michelangelo of wicker. The Museum is housed in a 19th-century manor house and presents fascinating furniture constructed from wicker, cane, wood and string. The extraordinary exhibition is complemented by wicker tapestries, landscapes, portraits and other compositions devoted to folklore and historical events. 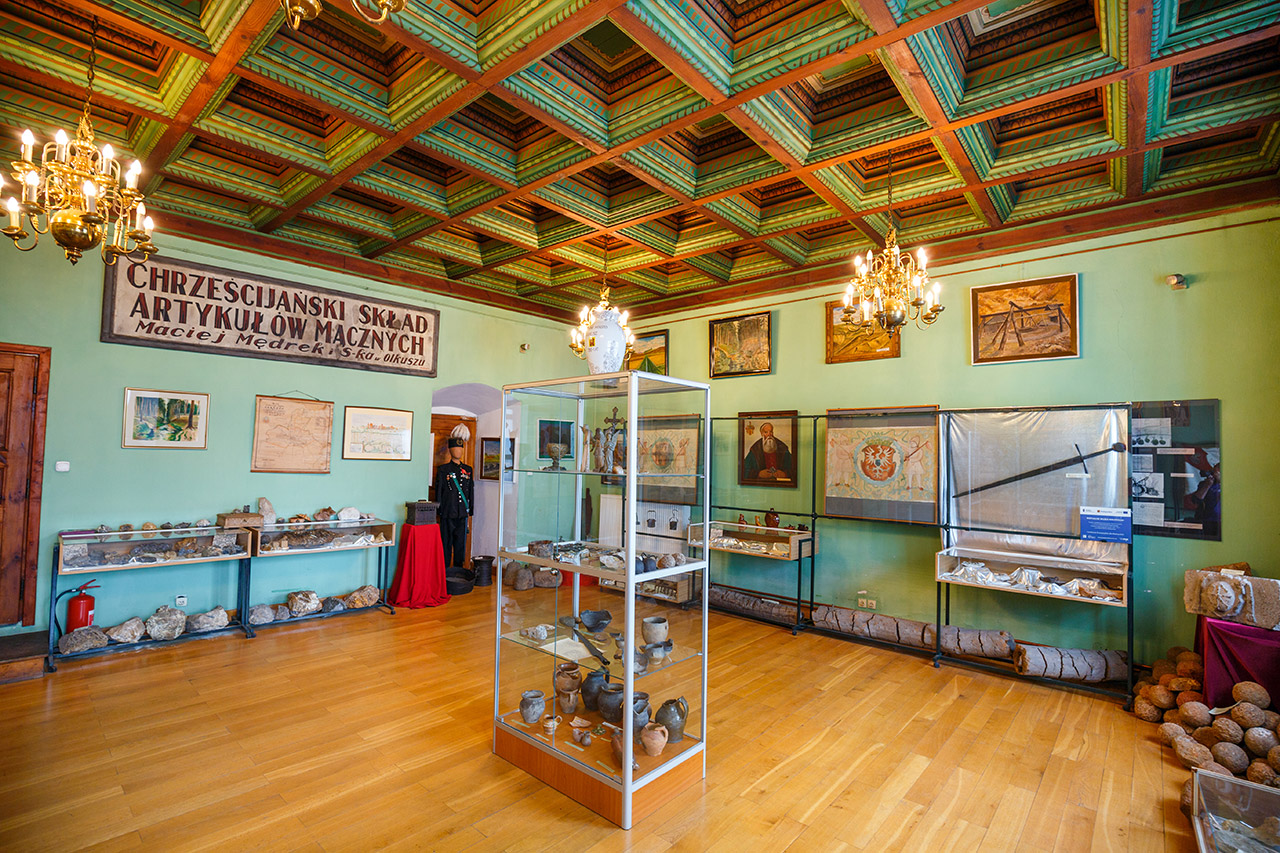 The town's newest attraction is the underground exposition located on two tourist routes. The first of them, located in the basement of the 14th-century Town Hall, presents the history of the town, its territorial development, the most critical events in its history, and the development of mining. A great curiosity is the town's interactive model. Figures and archival documents are displayed on multimedia screens. This interesting exposition allows you to learn many interesting facts and become acquainted with the town's mysteries. There is also a replica of an astronomical device in the vaults that belonged to an Olkusz astronomer, Marcin Bylica. The second exposition is in the basement of the Olkusz County Office, in the cellars of the former Royal Quarter, which used to be the headquarters of the mining authorities. The exhibition is devoted to the history, mining, and metallurgical traditions of Olkusz. It also partly presents the activity of the mint from the turn of the 17th century. The exhibition is enriched with an exposition of old equipment, including clay vessels, devices and machines used in the mine. A great attraction is a model showing the development of the mines, but visitors are most delighted with the mysterious Silver Chamber. It presents a story about the history of silver, which dates to antiquity and brings us closer to the history of the Olkusz mint. Admission to the Museum is payable. 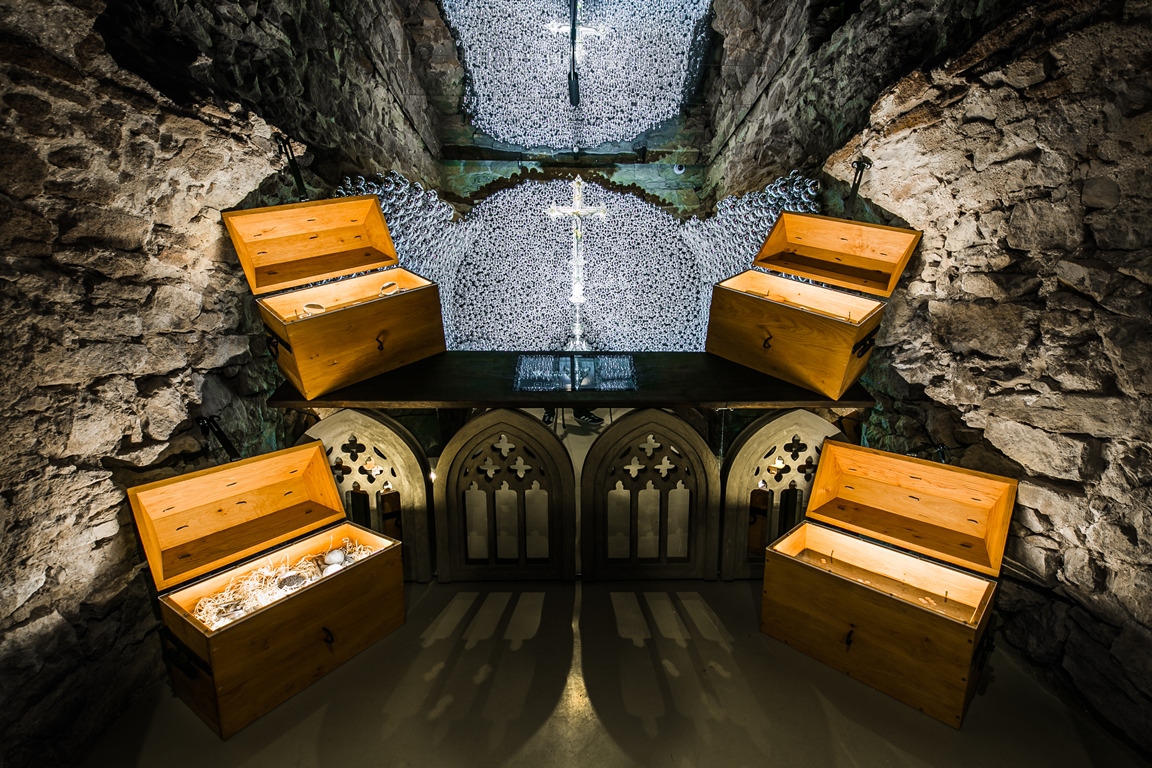 With a view of the surroundings: the Rabsztyn Castle

Near the town, just 3 kilometres from the centre of Olkusz, is the Gothic Rabsztyn Castle (also located on the Trail of the Eagle’s Nests), erected in the second half of the 13th century; once the upper Castle served as a royal stronghold and, in time, transformed into a larger complex. Initially, a stone tower was added as a defence tower, and later, at the foot of the hill, the middle Castle, together with residential buildings, a courtyard and a gate, were built. The history of the Castle is not fully known. It is not known who built the oldest part, but in the 14th century the Castle belonged to the powerful Leliwits-Melsztyński family. Over the years the owners changed. The building was also transformed, and the historical events of Poland left their mark on it. The Renaissance palace and the ruins of the partially restored Castle have been preserved. It is open to the public, where historical objects, valuable documents and excavations are exhibited. There is a café in the Castle cellars and a terrace on the observation tower with a panorama of Olkusz and its surroundings. When visiting the Castle it is worth going to Antoni Kocjan’s Cottage; he was an outstanding glider constructor and head of the Home Army's air intelligence service. The wooden house is an example of a traditional building from 1862, and it houses an ethnographic exhibition with souvenirs and everyday equipment. An autumn walk in the sands and in the beech forest

The most famous attraction near Olkusz is the Błędowska Desert. Where did the sand come from? According to legend, it was scattered by the devil during an unsuccessful attempt to cover up the Olkusz silver mines. Another version, slightly less spectacular, says that it was brought here by waters flowing from a glacier. Which one is closer to the truth? Probably the second version, but who knows if the devil was not involved anyway? As happens with folk tales, there is always a bit of truth in them. The creation of the Desert is related to mining in nearby Olkusz. Human activity contributed to the creation of the Desert by the cutting down of forests growing in the area for the needs of the mining and by lowering the groundwater level, which made the vegetation unwilling to return naturally to the sands deprived of water. In this way, a vast area of over 150 km2 was exposed. Today, it is a protected area and home to climate-characteristic plant and animal species (e.g. rare butterflies, sand lizards, and blindworms). The Czubatka Hill and the Rose of the Winds are viewpoints on the Desert. The Rose of the Winds, whose name comes from a wooden platform made available to tourists, is not only a place to admire the panorama, but also an attractive recreational zone. Visitors can take a walk on the sand and look at military guns, which are very popular with children. After a walk in the desert climate, it is also worthwhile to move for a while to the beech forest in the nearby Pazurek Reserve. This charming place, located in the southern part of the Kraków-Częstochowa Jurassic Highland, offers a 6-kilometre-long nature trail, which looks beautiful, especially in autumn colours. The characteristic feature of the landscape is limestone rock formations suddenly emerging between trees.

Olkusz is an excellent option for a day or weekend trip!