The heart of contemporary Jewish world beats in Kraków

It is going to be hot and revolutionary – all thanks to the 30th Jewish Culture Festival, which is going to be fire-themed this year. Get ready for some hot debates and lectures, as well as musicians on fire, and a bunch of surprises to boot – both live and online. This year’s edition will not start with a cantorial concert, and will not end with Shalom on Szeroka Street – instead, it will conclude with the first ever concert by women cantors in Poland.

It is a festival of life, although it respects the past and hearkens back to the memory of those who have passed away. It is a festival that draws upon tradition, but moves forward, looking towards the future with hope. According to its founder and director Janusz Makuch: It is a mirror, which reflects and focuses everything that determines the rhythm and place of Jewish culture in the contemporary world. For more than a quarter of a century, the capital of Małopolska has been at the heart of the Universe, promoting the region, strengthening the sense of identity and showcasing Jewish culture – the life of our neighbours. It all started out small back in 1988, when Janusz Makuch and Krzysztof Gierat organised a cosy event, which was supposed to remind the public of Jewish history and their contribution to the development of our country, its culture and society. Could they have guessed that bringing back the memory of Polish Jews who were either murdered or forced to emigrate would lead to the emergence to a world-famous festival, which showcases all facets of Jewish culture, which keeps surprising its audiences and which seems impossible to pigeonhole? Probably not.This year, we are celebrating the 30th anniversary of the festival, and – as always – every new edition brings a lot of new things. Get ready for:

lectures, debates, breakfast, coffee. Come and talk about the symbolism and meaning of fire, the tasks of contemporary literature and art; sit down and watch a film. The programme also features a series of meetings led by a woman – woman’s power, which can influence the fate of the world and do it in the spirit of Jewish tradition.

both classical and avant-garde, whichever suits your taste – traditional singing and DJ sets – all is here. The Jewish Culture Festival starts in an unusual way – with a concert of the Dark Matter Israeli duo, instead of the traditional Cantors' Concert. Thanks to them, Copernicus will come back to the courtyard of the Collegium Maius. Do you want to know what is it all about? Make sure to come.

which means many surprises. 10 artists from all over the world prepared their installations, objects and happenings in Kazimierz, which will make it easier for the participants of the Festival to become a part of the Jewish tradition and identity.

or Shabbat breakfasts and dinners. Jacek Mochnal will cook a special set of dishes inspired by the diverse world of Jewish cuisine and will serve it with the best DJs. What about the dinner? In an extraordinary and unusual place – Restobar Ogień – chef Aleksander Baron and the evening’s host, Robert Makłowicz, will take the participants on a journey filled with flavour. 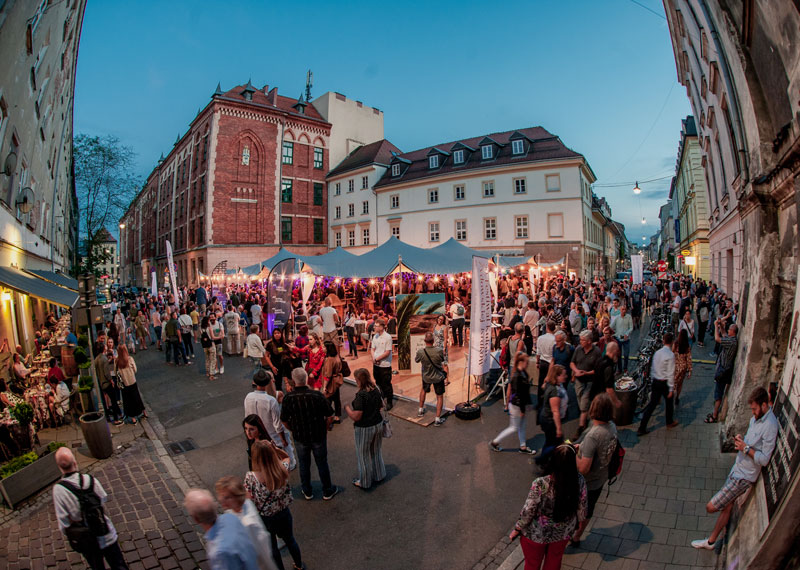