Seven pearls of Krynica-Zdrój, the spa where even beggars become celebrities - artykul - VisitMalopolska

Seven pearls of Krynica-Zdrój, the spa where even beggars become celebrities 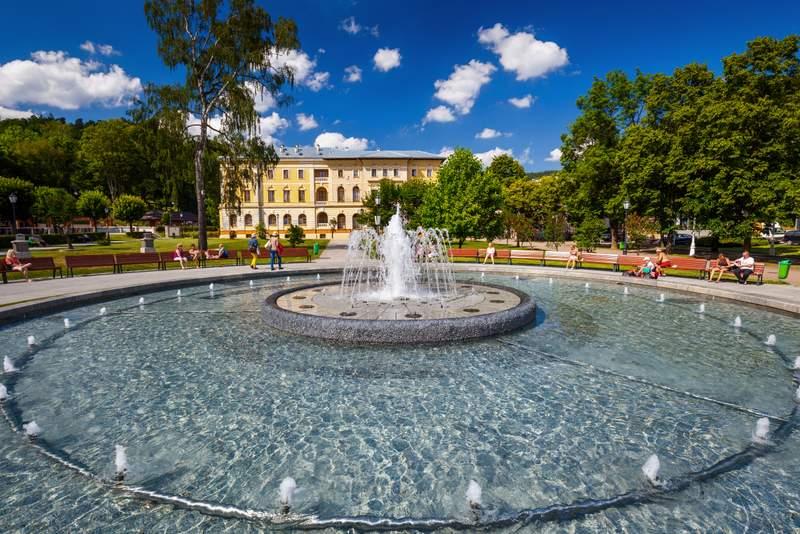 Just one day in Krynica is enough to get a taste of fame, great art, the wonders of water highly saturated with free carbon dioxide, and walks in the clouds.

Do you know of another place in the Małopolska region that has its own crater? This is no joke. In 1994, by the decision of the International Astronomical Union, a crater on a Gaspar belt planetoid was named Krynica, in honour of the famous Polish spa town of Krynica-Zdrój.
Or another such place where you can go from a Lemko beggar with garbled speech to a world-famous artist who exhibits his work in Paris?
How about another health resort, which for many years was a thorn in Zakopane’s side, as it was here that the most famous Pole of his time built his villa?
Seven is a magical number, symbolising the relationship between time and space. And this relationship in Krynica has always been an intimate and friendly one. So, meet the seven pearls of Krynica.

He was fascinated by railway junctions, time, Orthodox churches and of course Krynica. Because the iron railway was part of the world order. It regulated it and made it easier. And Nikifor felt safe in an ordered world. As his post-war discoverer Andrzej Banach recalls, Nikifor, despite his mental isolation, illiteracy, and inability to communicate with his surroundings, had no trouble with even the most complicated railway journeys. He knew when to arrive, where to change trains, and where to get off. He loved the railway, and that is why he painted it. He was born in Krynica and loved Krynica. He returned here twice, when he was taken to the other end of Poland as part of Operation Vistula. It was here that his dream of being the ‘Matejko of Krynica’ was born, and it was also here that the fame of the Lemko beggar who painted with school watercolours on cigarette boxes spread. May Lemkos forgive me, but I prefer the surname Krynicki (given to this extraordinary man who was so forgotten that he did not even have a personal name) to his birth name, Epifaniusz Drowniak. But this is not about names, but about a story. The story of a tubercular and impoverished man who used to sit on a wall on Krynica’s promenade, often chased away and ridiculed, and who today is considered one of the world’s most outstanding painters of the so-called naive, primitive art. To get to know it, visit the Nikifor Museum in the historic Villa ‘Romanówka’ and tip a hat to his monument.

He referred to himself as just a humble boy from Sosnowiec. But it was this baker’s son who fulfilled his American dream, conquering stages around the world. The Second Caruso, as he was called, was a man with a charming smile and a beautiful heart. Despite his global career and big money, he never refused to sing on the streets, balconies, or even from the roof of a taxi. What is the connection between the boy from Sosnowiec and Krynica, apart from the fact that he often sang on the promenade, where the concert shell and his statue stand today? It was his love for this place, where he was not just an ordinary sanatorium patient, and for his Homeland, or Patria. ‘Patria’ is a luxurious villa that Jan Kiepura built in 1933 and named out of sentiment and attachment for the country he always longed for during his distant travels. It is worth seeing this great artist’s only house in Poland, designed by Bohdan Pniewski, which is today considered a pearl of modernism. At the time it was built, it was ultra-modern and referenced current trends in hotel construction in Austria and Switzerland. Equipped with lifts, a telephone exchange, and a roof terrace, finished with marble and alabaster, it was considered a luxurious and elegant place. When Kiepura returned to his Krynica Homeland, crowds of admirers gathered in front of it. Krynica loved him; he is still alive here. And ‘Patria’, still standing, waiting for you.

3. The capital of opera and operetta

The budget was so small that chairs for the audience were borrowed from local spas. It was a real balancing act to find accommodation for the artists invited from all over the world, but it worked. As Aleksander Półchłopek, son of Stefan Półchłopek, the initiator and creator of the festival, recalled, the first Jan Kiepura Festival, which took place in Krynica in 1967, a year after the tenor’s death, was written about in Dziennik Polski, Tempo, and Gazeta Krakowska. There was not enough money for television coverage. The story of the festival is one of great love for music and the commitment of people who wanted Krynica to return to its pre-war glory. It is also a story about memory, about the fact that tradition must be nurtured. It is also about time, because the festival seems to go on forever, it has also become a permanent fixture on music lovers’ calendars worldwide. The first edition of the festival took place on the promenade, as there was no spa house or stage yet, let alone a concert shell. Who would have guessed then that Krynica would become the summer capital of opera and operetta?

One day, Baltazar Hacquet, a professor at the University of Lviv, came to Krynica to study the local springs. He studied and researched, and finally made a positive judgement that the local springs were safe to bathe in and to drink from, as they were good for health and for the treatment of various ailments. With this positive verdict, he began the history of the spa. But if one wanted to be precise, one would have to add that Gabriel Rączyński, a Jesuit, physiographer, researcher and naturalist, who described the waters in the mid-18th century, had already known about their medicinal qualities. The history of the waters has had its twists and turns, and the spa has had its better and worse years. Fortunately, Dr Józef Dietl, a professor at Jagiellonian University, later recognised as the father of Polish balneology, took an interest in the waters and began to promote them among doctors, encouraging them to send their patients for treatment in Krynica. The secret of the waters which are drunk today in Krynica are szczawy, mineral waters highly saturated with free carbon dioxide. To put it briefly and unscientifically, this saturation is the result of tectonic movements. So there is the famous Zuber water, there is Jan, there are the Tadeusz and Mieczysław springs, and you can drink it in four different pump rooms, which are worth a visit, if only to explore the architecture of the spa. I only wonder, why are none of them named after a woman?

The Devil’s Rock on Jaworzyna Krynicka is not a cursed place at all. For although according to legend it was supposed to have been dropped here by the devil himself, it is a story of the victory of good over evil and love over hate. It is worth remembering this when going to this highest and very attractive scenic peak, which can be reached by the  gondola lift. It is not very high, as it rises 1,114 metres a.s.l., but it does offer an attractive view, especially in autumn, when the trees change colours getting ready for winter. In winter, however, Jaworzyna turns into a modern ski resort, which attracts not only those who want to go wild on the snow, but also lovers of winter walks that end with hot tea in the hostel.

6. The observation tower – a walk in the treetops

It is the fulfilment of humanity’s dream to fly, to get away from the ground, and perhaps to walk closer to the clouds. The observation tower (description of the Słotwiny observation tower) was built precisely in order to feel a little closer to the sky. Located in the heart of Beskid Sądecki, among beech, fir and spruce forests of Jaworzyna Krynicka, it is the highest point of the area. The imposing wooden structure lifts visitors 49.5 metres up. The path that winds its way upwards is 1,030 metres long, so it gives you plenty of time to get to know the history, nature, and beauty of the area through multimedia panels. A wooden pathway supported by eighteen towers and 87 pillars leads to the tower. Can you imagine watching a sunset from such a height with a view of the Tatra Mountains?

They have elaborately decorated porches with patterns cut in wood. There are also decorative pinnacles and trusses. What more is there to say – it’s Swiss chic. And according to it, the front porch was to be imposing, supported by pillars, and have one or two tiers of balconies. The elevations were varied with verandas, turrets, and bay windows. Krynica’s architecture (description of the historic wooden buildings of Krynica) of the 19th century referenced the most popular trends in the world, because those that came from Zakopane did not find favour in the spa. Thus, when visiting ‘Witoldówka’, where dietary treatment used to take place, ‘Romanówka’ with its openwork balustrade (today the Nikifor Museum) or ‘Wisła’, a boarding house for married and unmarried women, one can observe the details that distinguished this trend. Polish, as well as Chinese elements appear in some of the buildings. Such has, for example, the ‘Słotwinka’ pump room. But Krynica is also modernism – in which style larger and more functional buildings were constructed – as well as historicism and neo-Renaissance. The architectural richness makes Krynica a place where one can observe the changing trends, influences and moods brought by the greatest designers of the time.