www.melsztyn.pl
Show details
The tremendous square tower looming over the crown of trees high above the Dunajec valley is the best preserved relic of the castle in Melsztyn near Zakliczyn.
The ruins can be accessed by climbing a steep path or by driving uphill from the other side. In 1347, Spycimir Leliwita – a castellan of Kraków – had this fortress built on the hill over the Dunajec river. His descendants took their surname Melsztyński after the name of the building. The fortress occupied a long and narrow hilltop, which was fully surrounded by defensive wall. The most significant element of the construction was the square tower called “donżon”. It was the last, yet also the strongest point of the fortress’s defence system. In 1771, during the fights of the Bar Confederation, the castle was destroyed by the Russian army as a stronghold of the Confederates. Everything that survived were the three walls of “donżon”, traces of the surrounding walls and remains of the vaulted rainwater tank in the courtyard. Unfortunately, the Gothic chapel was utterly obliterated. The castle is now a protected ruin.
Back 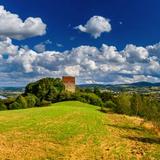 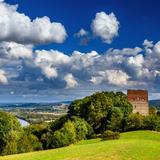 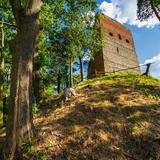