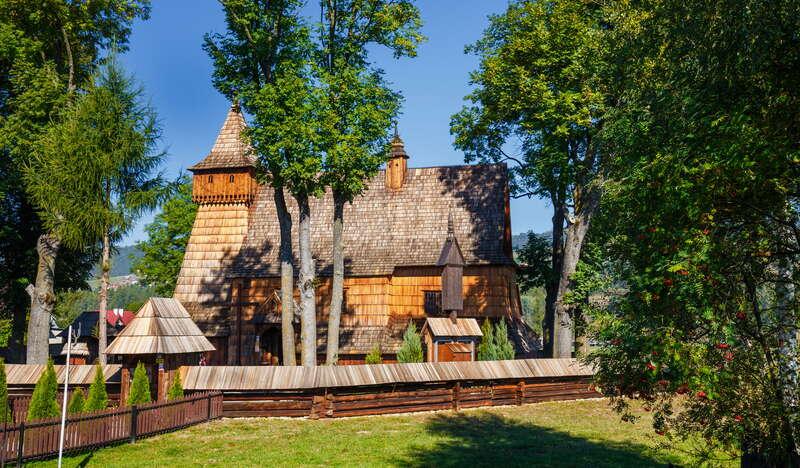 The origins of the small church in Dębno, surrounded by a circle of old trees, date back to the 15th century. The exact date of its construction is unknown, but it is believed that it was 1490. According to the colourful legend, the temple was erected by brigands after St. Michael appeared to them on an oak tree. It appears from the preserved church documents and the inscription on the lintel that the tower crowned with a pointed-arch dome was added in 1601.
Throughout its long history, the church did not undergo any major changes, and the renovations did not leave a mark on its stylish Gothic shape. In 2003, the artistry of the small church and its precious furnishings were appreciated and the church was inscribed on the UNESCO list. The church was made from fir and larch wood without the use of nails, and the individual elements are joined by crossing wooden logs. The building is oriented toward the east (i.e. the chancel is directed east, which was typical of medieval churches) and has one nave. The steep roof is shingled. The harmonious exterior hides a magnificent interior. The unique, perfectly preserved polychrome from the turn of the 15th and 16th centuries makes the strongest impression. The paintings resembling fabric cover all ceilings and walls (except the whitewashed fragments of nave walls), and even the choir platform, the pulpit and benches. Among the colourful decorations, as many as 77 motifs occurring in 12 arrangements and 33 colour variants were distinguished. Apart from plant and geometric ornaments, the most frequent patterns include Gothic architectural forms: arches, spires and traceries. The paintings were made with the use of templates called stencils, and the width of the strap corresponds to the wall logs and ceiling planks. The walls also feature rhythmically arranged painted consecration crosses, i.e. zacchaeuses. While admiring the paintings, you should pay attention to the precious church furnishings. The Crucifixion group located on the decorative rood beam beautifully harmonises with the painted décor. The crucifix is the oldest work of art preserved in the church and it is dated back to the end of the 14th century. It is also worth mentioning the main altar: a painted triptych from the turn of the 15th and 16th centuries. It is recognised as a splendid example of Gothic art. Its beauty is emphasised by the golden background on which fall reflections of the light. What also influences the atmosphere of the interior are the modest, but centuries-old furnishings: the low pulpit and patron’s pew, as well as the portals with Gothic-style forms.
Multimedia 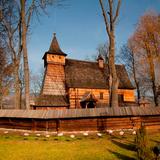 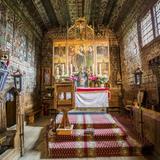 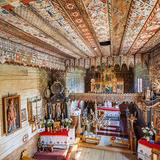 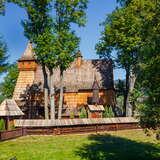 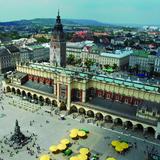 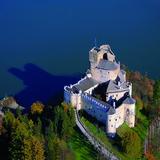 Around the Pieniny Park

See more Go to Article Around the Pieniny Park