A new museum in Kraków. Stanisław Wyspiański knew the Polish soul like nobody else - artykul - VisitMalopolska

A new museum in Kraków. Stanisław Wyspiański knew the Polish soul like nobody else

Who was Stanisław Wyspiański? Like Leonardo da Vinci, he wanted to repair the whole world, so he rummaged around in people's souls through paintings, prose and poetry, architecture, even social activities, as probably not everyone knows that he was also a Kraków city councillor. He even wanted to rebuild the Wawel Castle in his own way. He is one of the most important, original and valued artists of the turn of the 19th and 20th centuries, on a par with Klimt, Mucha or Gaudi. From today, in Kraków's Sikorski Square, one can visit the new museum dedicated to Stanisław Wyspiański.

A Kraków inhabitant from Kraków

Stanisław Wyspiański was born in 1869 in Kraków at 26 Krupnicza Street, in the house where the famous symbolist painter Józef Mehoffer once lived. The artist's father was a sculptor and had a studio at the corner of Kanonicza and Podzamcze Streets, "living off the figures of the dead with a great crowd", and because he sought solace in alcohol, his son was brought up by his aunt, at whose tea parties Jan Matejko, Józef Szujski and Karol Estreicher frequented. He attended the oldest secular secondary school of St. Anne in Poland, where his classmates included Józef Mehoffer, Jan Rydel, Stanisław Estreicher and Jerzy Żuławski. He later studied at the Academy of Fine Arts and the Jagiellonian University. He started writing plays as early as in secondary school. He the married a peasant woman, Teodora Teofila Pytko, who already had an illegitimate son.

You should not miss: 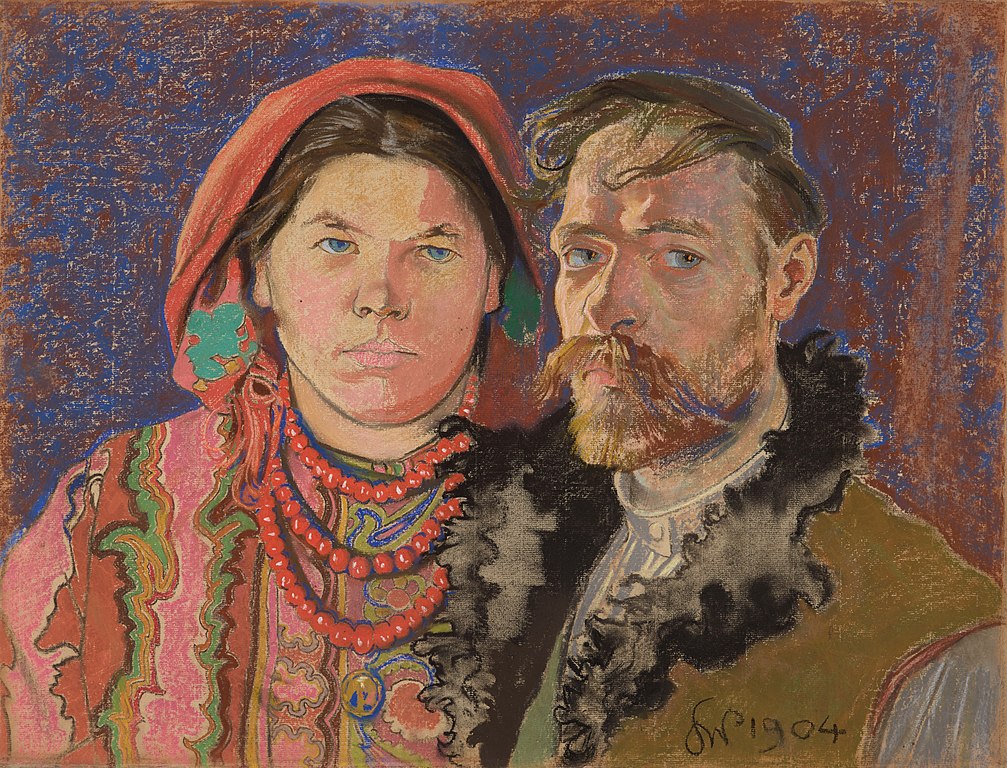 The Creation of the World and other works

Stanisław Wyspiański absorbed knowledge, not only academic. He travelled almost all over Europe, collecting cultural experiences, studying the works of contemporary artists and the features of Gothic cathedrals, absorbing ancient dramas and going to see contemporary operas, dazzling with their scenographic fireworks. He was pulled between the classics and the new trends, which he quickly wanted to subordinate to more profound logic. However, we will show you a small part of Wyspiański's soul - his most visual works, namely stained-glass. They can be seen in several places in Kraków. At the end of the 19th century, the artist designed stained-glass windows for the Franciscan Church. These are images of St. Francis of Assisi and the Blessed Salomea, as well as a work entitled "God the Father – Let There Be!". Especially the latter, full of expression and tension, proves the unity of thoughts and their artistic representation. In the so-called Wyspiański Pavilion, one can find the stained-glass windows of St. Stanisław, Henry the Pious and Casimir the Great, designed for the Wawel Cathedral and made in contemporary times. For a whole decade, the cartons lay in the Wielopolski Palace cellars, where the Kraków magistrate's office was located. When found, according to Andrzej Wajda's idea, they lived to see a specially intended pavilion, in the windows of which the stained-glass windows were built in. 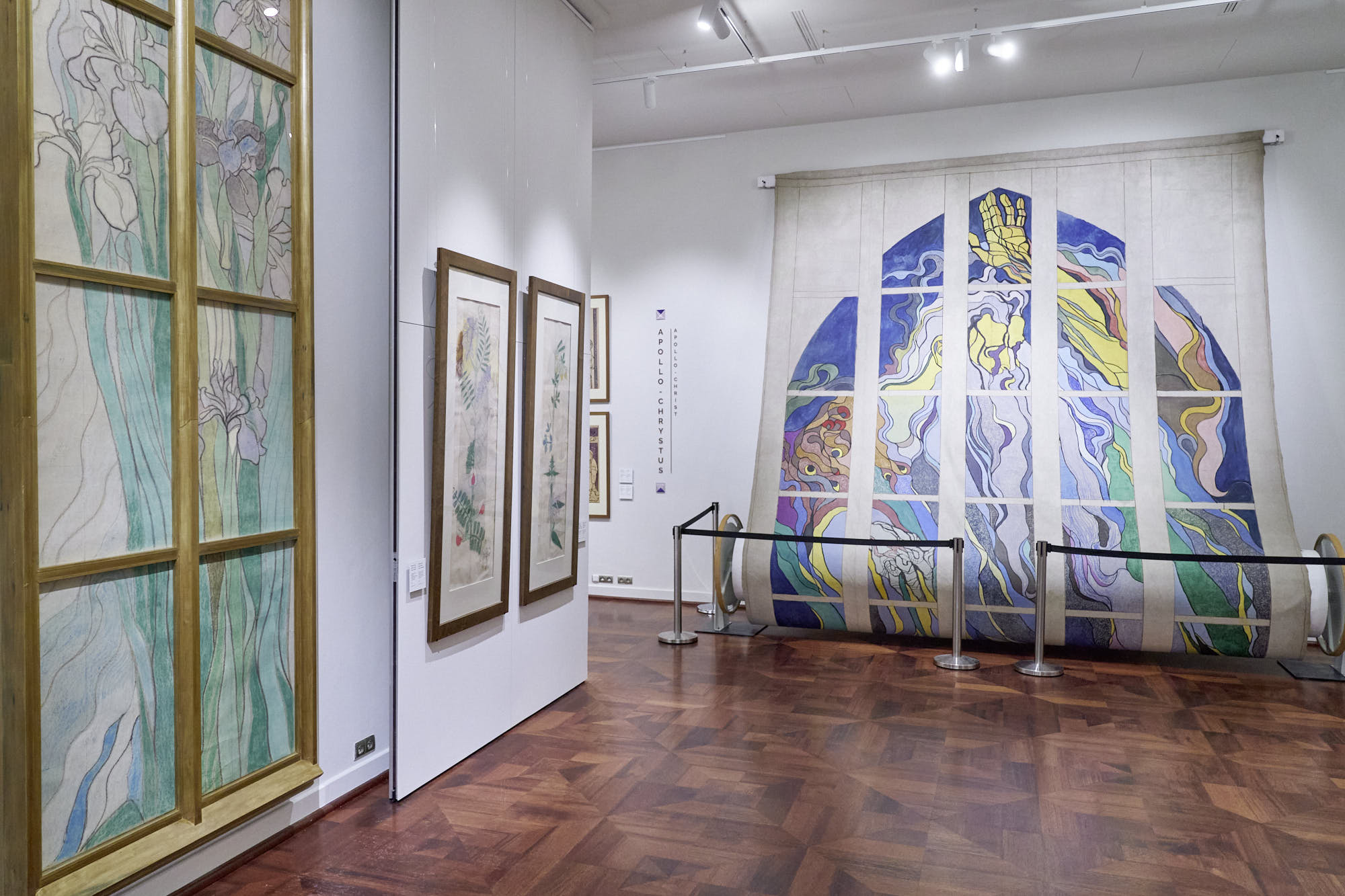 Kraków, the centre of the world

After many lean years, Wyspiański achieved some financial stability, and thanks to awards and subsidies, he rented a seven-room flat on the second floor of a tenement house at 79 Krowoderska Street in 1901. The studio, painted dark blue, was called Sapphire. He created his portraits of children, the series "Motherhood" and landscapes with Kościuszko Mound, multiplied by the changing seasons of the year there. It is here that "The Wedding", "November Night" and "Liberation" - works that are crucial to the Polish soul - were created. The Stanislaw Wyspiański House Foundation operates here, organising activities for children and young people. 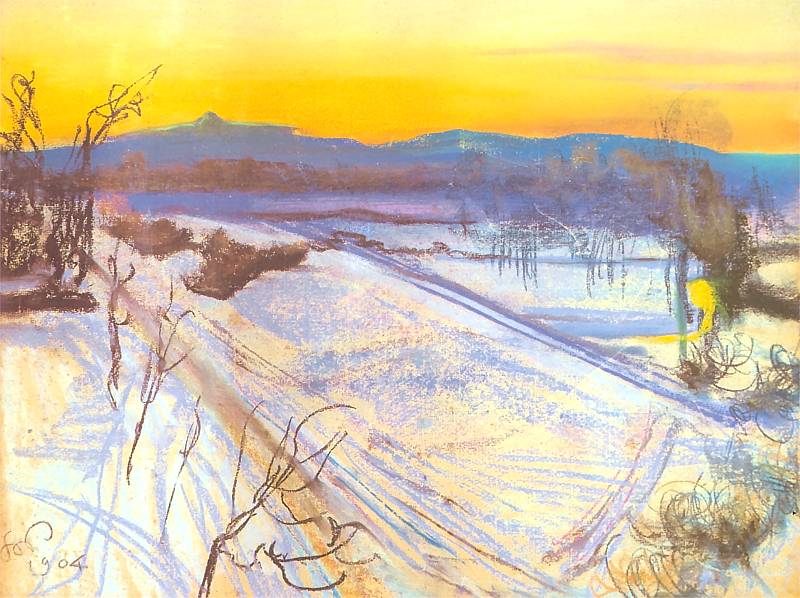 Rumour about "The Wedding"

"The Wedding" is unique piece of literature, even on a worldwide scale. Admittedly, the drama lacks a touch of universal values, but it explores the human soul to the last drop of bloodI, and in the end ... a famous writer, Wyspiański's friend, marries a peasant woman from Bronowice. Ladder carts pull up in front of St. Mary's Church, and the wedding takes place in the house of a Galician politician, who is also married to a peasant woman. The wedding gathers the cream of Kraków's society and half of Bronowice. Wyspiański is also there, looking through his binoculars at these scoldings, discussions and squabbles. Who is not here? Moreover, Wyspiański adds fantastic characters: ghosts and phantoms, as well as inviting straw-dragons covered in roses into the dance ... as, ladies and gentlemen, the action is taking place in autumn. Soon, in the theatre, still standing today, the participants of the Bronowice wedding could see themselves. However, they were no longer themselves; they were already personages of a great national drama. They are still relevant today! The most exciting thing is that the descendants of those events live among us - blood from blood, a bone from bone. One can see and touch them. As a matter of fact, we are all of them.

Go out before the autumn dusk to the Planty. See this strange place, which was the spirit of Kraków's power, transformed into a park, where shadows of history stroll. Let just a bit of fog appear, and a theatre of phantoms will appear before our eyes. One then does not know whether they are in the world of the dead or the living. Imagine that Wyspiański looked at them the same way. He used to come here and immerse himself in the mysticism of the place, and then he tried to transfer it onto canvas. Perhaps it was also from here that the straw men (Chochołs) went to the wedding in Bronowice. Here is "Planty Park at dawn" from 1894. Do you get a similar impression?

What do you think? Did Stanisław love Theodora? Among Kraków’s inhabitants, the dispute is also alive, like the legend of the Wawel Dragon. I think so. How much love must you have in you to portray your wife and children in such a way? Take a look at these paintings. They are realistic but also full of tenderness. So, despite Stanisław's progressing illness, the Wyspiańskis still moved to the countryside, to Węgrzce, on the road to Warsaw. Wyspiański died in 1907 of syphilis, which poisoned his body and his mind. He was a great artist, but at the same time, too wise to be genuinely great. The funeral, as befits Kraków, was a great event, as our city was then famous for its lavish consolations, during which the glare of the streetlamps, shielded by mortcloth, even eclipsed the sun! The ringing of the Sigismund Bell escorted the procession.

When November comes, please, go to the Church of the Rock, to the Crypt of the Deserved, and contemplate at the grave of the man who wanted to make us better. 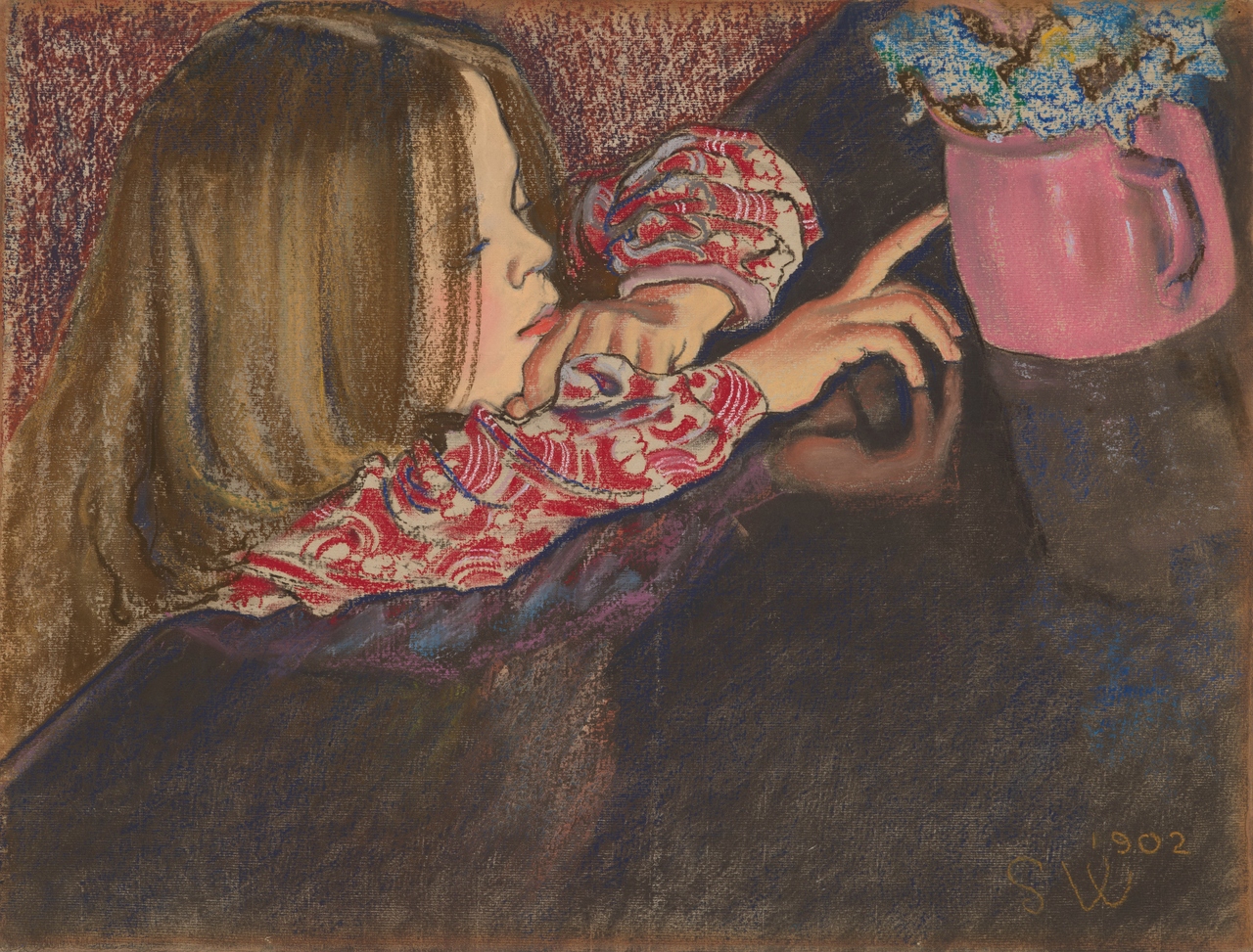 Wyspiański finally has his own museum!

The National Museum in Kraków, established in 1879 from donations made by the city's citizens, has the most extensive and most valuable collection of Stanisław Wyspiański's works, comprising around 1,100 items. A large part of it will be shown in the new museum building. The Wyspiański Museum, a new branch of the National Museum in Kraków, has opened at 6 Sikorskiego Square, displaying 200 works, mostly visual art, by the great artist.

The National Museum recalls that most of Wyspiański's legacy was donated or purchased for the collection shortly after his death in November 1907. Even then, there were plans to create a branch devoted to Stanisław Wyspiański.

The Wyspiański Museum is housed in a former granary building, erected in the eighteenth century outside the city walls at the time, in Kraków's largest and oldest jurydyka, called Garbary (or Piasek). Over the years, the historic building served various functions, including as a factory, shop and seat of the Association of Architects of the Republic of Poland. After 1945, it was taken over by the National Museum of Culture (MNK), becoming a warehouse for works of art for many years, and in 2013-2021, the Centre of European Culture "Europeum".

On the ground floor of the Stanisław Wyspiański Museum, one can see Wyspiański's self-portraits, complemented by images of his closest family: his wife and children, as well as portraits of his friends, patrons and close acquaintances. The part of the exhibition is complemented by depictions of places where Stanisław Wyspiański lived and worked: views of his studios in Kraków and Paris, landscapes outside his flat in Krowoderska Street in Kraków, views of the streets of his hometown and landscapes of the villages near Kraków where he travelled with his family. The first floor presents works by Stanisław Wyspiański that touch on the three most important themes in his work, hence its sections are entitled: "Elements", "Wawel - Drama of Kings" and "Apollo-Christ". Around these three themes is built the story of an artist who, in his work, dealt innovatively with national and religious issues, referred to memory and history, and was inspired by antiquity and the Middle Ages. Wyspiański's most outstanding works, including a design for the stained-glass window “God the Father” for the western window of the Church of St Francis of Assisi in Kraków and pastel designs for the painting decoration of the Church, designs of stained-glass windows for the Wawel Cathedral, proposals of decorations, furniture and fabrics for the edifice of the Kraków Physicians' Society and the hall of the Polish Artists' Society "Sztuka" in the Kraków Friends of Fine Arts Society, and a model of the Akropolis present an interesting art form and indicate the versatility of the artist's oeuvre: from painting, through applied art, to architecture.

In the basement of the building, in the "My Books" room, Wyspiański's book collection with his handwritten notes is displayed, as are first editions of his dramas and other works by the authors, for which he made the covers and illustrations. It is also possible to use an online catalogue of the artist's works. Next door, in the second room, called "Metamorphoses", viewers can see his theatrical works: posters to Wyspiański's plays, selected photographs and film fragments from his most famous stagings and adaptations of literary works. 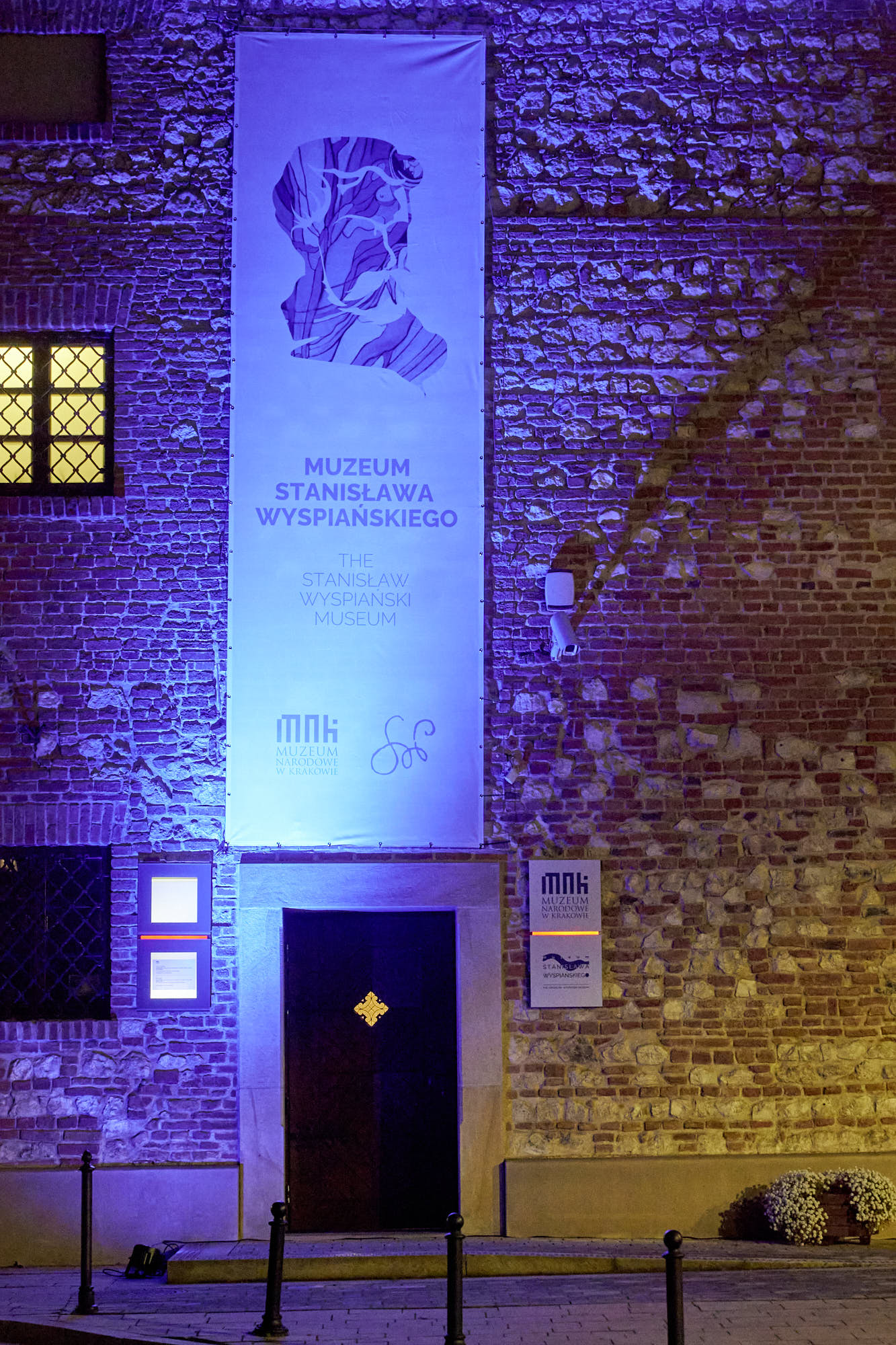