The Forest Sanctuary of Our Lady, Queen of the Springs of Krynica – Healing of the Sick in Krynica-Zdrój - Obiekt - VisitMalopolska

The Forest Sanctuary of Our Lady, Queen of the Springs of Krynica – Healing of the Sick in Krynica-Zdrój 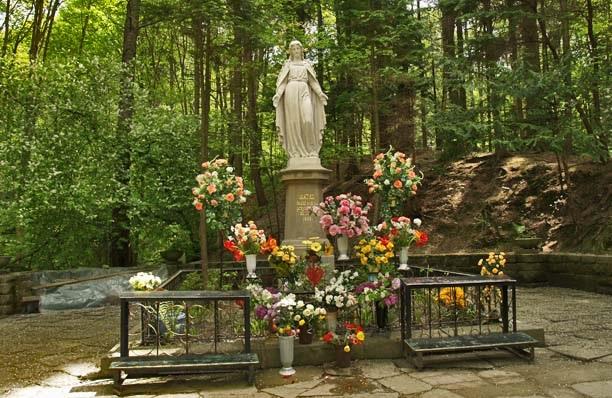 www.wnmpkrynica.pl/miejsca-kultu/lesne-sanktuarium
krynica_zdroj@diecezja.tarnow.pl
Show details
The forest sanctuary was built under the top of Parkowa Hill according to the design of Artur Grottger. It is related to the local legend of love between the Muszyna knight and the local shepherdess, as well as the legend of the devil wishing to crush the life-giving spring with a heavy boulder, known as the Diabelski Kamień (Devil's Stone), located on the slope of Jaworzyna Krynicka.

The representative of Romanticism, the painter Artur Grottger, delighted with the forest and the legend of the miraculous spring, decided that a statue of Our Lady of Graces would be erected at the edge of the forest at the foot of the mountain. According to his beautiful drawing from 1864, a statue of the Madonna was made and placed in a forest church. In 1884, the bedrock that had begun to slide from beneath the statue was reinforced with a high wall. Later, the sanctuary was fenced with an iron balustrade. In 1943, a violent hurricane knocked down the huge trees growing around the statue, and fortunately it did not damage the Madonna. In 1950, a new foundation and a wall made of granite from the Tatra mountains was made in the sanctuary.

To this day, the miraculous figure of the Virgin Mary is frequently visited by tourists and those walking to the top of Parkowa Hill. The sanctuary also attracts believers seeking healing, as evidenced by numerous votive offerings.

The Forest Sanctuary of Our Lady, Queen of the Springs of Krynica – Healing of the Sick in Krynica-Zdrój 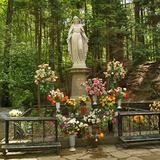 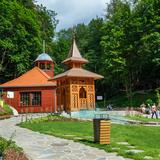 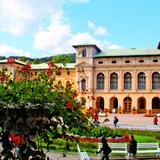 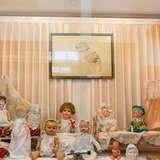 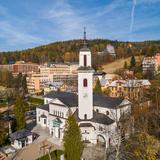 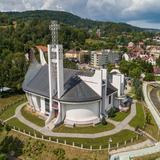 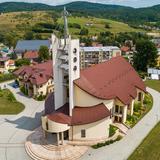 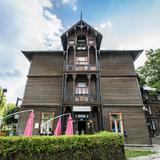 The Wooden Buildings of Krynica-Zd...

See more Go to Article The Wooden Buildings of Krynica-Zdrój 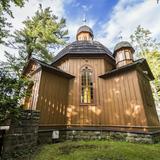 The Auxiliary Church of the Transf...